The west coast, more specifically, Los Angeles can be credited for the Food Truck revolution. With the popularity being bigger than ever before, the options of mobile cuisine are virtually endless. Everyone has a favorite, but which truck is good enough to be the best of the best in Los Angeles?

We chose 15 of the most popular food trucks and put them head to head to battle it out in a winner take all competition, with votes being casted by fellow Los Angelenos. Join the fun and help your go-to food truck earn the title of Rush49's Best of LA: Food Trucks!

Did your fave make the list? Here are the contenders:

We serve American Comfort food with a twist! We use quality meats, organic produce and lots of flavor in every heartwarming dish. What is a WACHO ? The word WACHO comes from waffle fry and Nacho. We use criss-cut potato fries "waffle fries" and top them with Nacho toppings. What is Comfort Food? Comfort Foods are traditionally prepared foods with sentimental appeal. Comfort Foods have nostalgic appeal and are easy to eat, rich in flavor and make you happy. 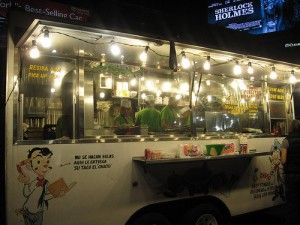 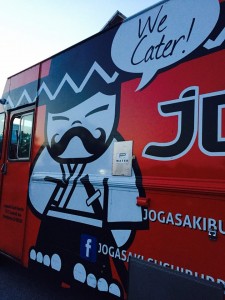 L.A.-based food truck Jogasaki Sushi Burrito is definitely having some fun with their unique take on sushi. Their "mobile" menu consists of familiar sushi combinations, as well as more adventurous items such as spicy tuna nachos and salmon ceviche tacos, all served up in a convenient on-the-go fashion. 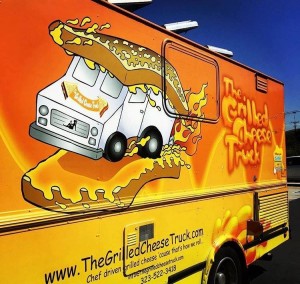 The Ultimate Comfort Food on Wheels:Inspiration happens when you least expect it! What started as a fun, weekend activity to enter our Cheesy Mac and Rib Melt into LA's 7th Annual Grilled Cheese Invitational quickly became the idea behind The Grilled Cheese Truck.After seeing the masses of grilled cheese fanatics gathered to pay homage to our favorite childhood (and adult!) comfort food, we realized that this world needed more grilled cheese sandwiches brought to the streets. Not just the classic bread, butter and cheese, but amazing creations that are constructed with the best ingredients, local produce and made with nothing but love. 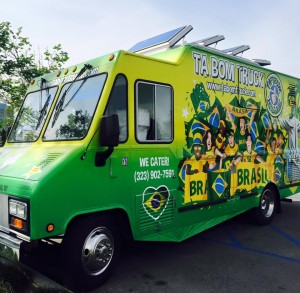 The Ta Bom Truck is the first Brazilian lonchera to hit the streets of Los Angeles. We are a team of mother (Ilse) and twin daughters (Juliana and Jaqueline) who serve authentic homemade Brazilian goodies. Our menu ranges from salgadinhos (appetizers) like coxinhas and pastels to satisfying meals including cachorro quente (Brazilian style hot dog), hamburgao and burritos. Our mission is to introduce the savory flavors of Brazil to the great people of Los Angeles. We look forward to meeting you all and serving you home cooked meals everyday. 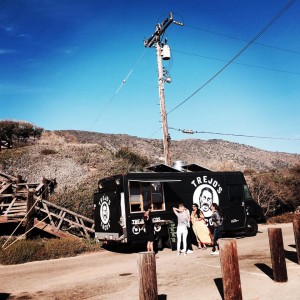 If you have a company lunch, wedding, or another event that needs to be catered, Trejo's Truck is available. Nothing is better then some tacos at your office lunch, holiday party, studio event, wedding, birthday, or Machete viewing party. Now that celebration can include Bad Ass tacos when your very own Trejo's Truck rolls up to the festivities. 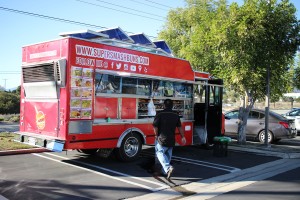 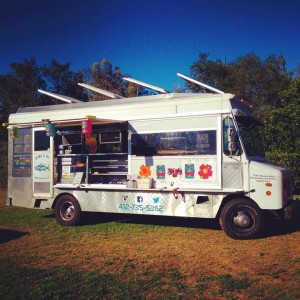 Poke 2 Go brings you delicious and accessible Hawaiian Poke in LA. Mixing fresh high quality Ahi Tuna and local-sourced ingredients and unique flavors with a California Fusion. Poke 2 Go was created by LA chef's and designed to bring high style, high quality restaurant meals without compromising value and taste; promises to win you over with every bite. 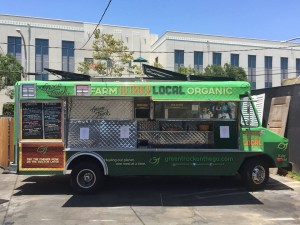 At Green Truck, serving healthy, gourmet food in a fast and efficient way is not enough. We believe that a healthy environment is tantamount to living a healthy life. We have taken every measure to ensure that our food is good for you and our planet. We use only certified organic ingredients, which protects your body from harmful pesticides and keeps pollutants away from plants, animals, and waterways. We buy locally grown ingredients whenever possible. Our solar powered commissary allows us to add whatever clean energy we don't use to the city's power supply. All of our cleaning products are environmentally friendly, ensuring that we are not polluting oceans with chemicals. Our trucks run off of vegetable oil previously used by us and other food service companies in the Los Angeles area. All of our food packaging containers, are made from biodegradable products rather than plastics and Styrofoam. At Green Truck, the health of our people and our planet is the bottom line.

For many, Mom's cooking is the gold standard. She makes the best tikka masala and her kalbi cookouts empty the neighborhood. But sometimes, you're not in the mood for baked ziti. You don't want that old larb you grew up on. You want Pico House. A Los Angeles based food truck, we serve flavor packed grain bowls Mom would envy. When a burger or burrito just won't cut it, come to Pico House to get what you're craving.

Son of a Bun

Son of a Bun is all about bringing fresh, locally-sourced and premium products in the familiar formats of a burger, chicken or dog. All the toppings are sourced locally, using only the freshest ingredients. Choose from 4 pre-fixed styles of gourmet toppings on top of hand-pressed patties, all-natural grilled chicken or a 100% all-beef dog. House-made chips, coleslaw and donuts round out the menu, upgrading simplicity to its finest.

Since we launched our first truck - a barely drive-able (but pimped out) postal van - at Coachella in 2009, we've been combining our two great loves, architecture and food, to create a unique line of mouthwatering desserts. With a focus on seasonal/local ingredients and a sweet and savory flavor profile (Fried Chicken & Waffles ice cream, anyone?), we've grown to serve out of locations in Los Angeles, New York, Austin and Dallas - and can now be found at local retailers nationwide.

Their regular runs to Rowland Heights, Diamond Bar, Granada Hills, Venice and El Segundo was a silent rallying cry for people to see beyond the bubble of Hollywood and downtown and into the silent beat and rhythms that run the entire city of Los Angeles. Within a few short years of putting street food on the map of the minds of the everyday diner, Kogi has become a kind of iconoclastic symbol wherein which legends are born and rules are made to be broken. 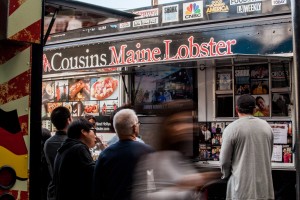 View all posts by: jillian